What inspired you to go into a career in performance art? How old were you when you became interested in performing arts?

When I was young my Mum had to work numerous jobs to send me to dance and drama lessons so from the age of 5 I was involved in performance. I went to ballet, tap, modern and jazz lessons until the age of 16 but at the age of 14 I had met a Drama teacher at a Saturday school who inspired me. She encouraged me to work hard and believe in myself. She made me feel that I could make my dream a reality. My drama teacher at high school was really unhelpful and uninspiring so if it hadn't been for those mentors outside school I don't know if I'd have had the courage to be where I am now. It took until I was in my early twenties to meet another person, a director who really gave me the courage to realise that I wasn't only a performer but I could use my skills to write and produce too.

What kind of training did you have?

I did GCSE drama, Theatre Studies A-level and then went on to do a BA Hons Media and Performance degree at Salford University.


How has your performing technique changed since you began?

It's changed a lot. I have always been interested and moved by Edward Bond's work. I first read his play 'Saved' when I was at school after coming across it in a library and knew from that moment that I'd found something I understood. I continued to be curious about his work and feel that his theories on drama have influenced me to become the artist I am today. I learnt about other theorist's work at college and university but it wasn't until I read some of Bond's work and was able to see him speak about drama that it all clicked into place for me. I cannot urge people enough to read his work and hear him speak.

How do you prepare for a performance? Do you have any warm ups, routines or rituals?

It usually involves me worrying and triple checking that all my props and costume are in the right place. I do a vocal and body warm up before I get in my costume but once I've checked everything I tend to just smile, remind myself of how lucky I am to be here, doing what I love and focus on the story. I always like to do a group hug with my team before the first performance. Oh, and I like to brush my teeth before a performance too!


What do you do if you forget your lines?

You should ALWAYS know your lines and I always make sure that I know them well enough that I can play music REALLY loudly and say my lines over the top of the music, in a different rhythm than the song. When you have to think about your lines you're acting, when you know them well enough to say them over music and can do something else at the same time that's when you can really be in the site, and in the drama. Don't get me wrong, I have forgotten them before but you should know your lines, your fellow actors lines and the story so well that you can improvise until you're back on track. When I get a script I NEVER highlight my lines because doing that focuses on what I'M saying and not what WE, and the STORY are saying.


What was your first performance job and what did it lead to?

I've worked in a few different forms so there are quite a few 'first' performances for me. Performing my own work pushed me more than anything else and gigging in stand up comedy lead me to write and perform much more freely and feel more comfortable putting more of myself into whoever I am playing.

As a not for profit organisation how to you finance your performances? Which organisations support you?

In the early days I funded myself. I worked hard in other jobs to fund performances, props etc and lived a very frills free life! Now that I have built a reputation for myself and my work I am thankful that it has led me to have my work funded by a few organisations. The largest and most recent being Arts Council England. Without funding from many sources the arts would be a very different place, and not in a good way! With funding being so hard to secure because money is so tight there is also a new wave of funding which, I haven't done myself but organisations are using more and more called 'crowdfunding'. You upload your bid to a site and the public can directly give to your idea to get it off the ground. It just shows you the power of the public and how much we all need arts to understand and challenge our world.

How do you develop your skills?

I work with a lot with different people who are skilled in similar and very different things. I talk a lot to others and attend workshops and meetings. Skill sharing and support from other artist is so important.


Do you have any tips for an aspiring young actor?

Believe in yourself. Take advise but only from people you trust, you value and who challenge you. Work hard. Be prepared for ups and downs. Only work for free if you're getting out the same as you're putting in. Enjoy it!


Thanks so much for your time.

No problem! Thank you for seeing 'The Secret Diaries of a Teenage Queer' :)

The Secret Diary Of A Teenage Queer. 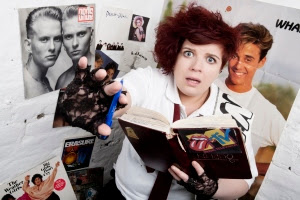 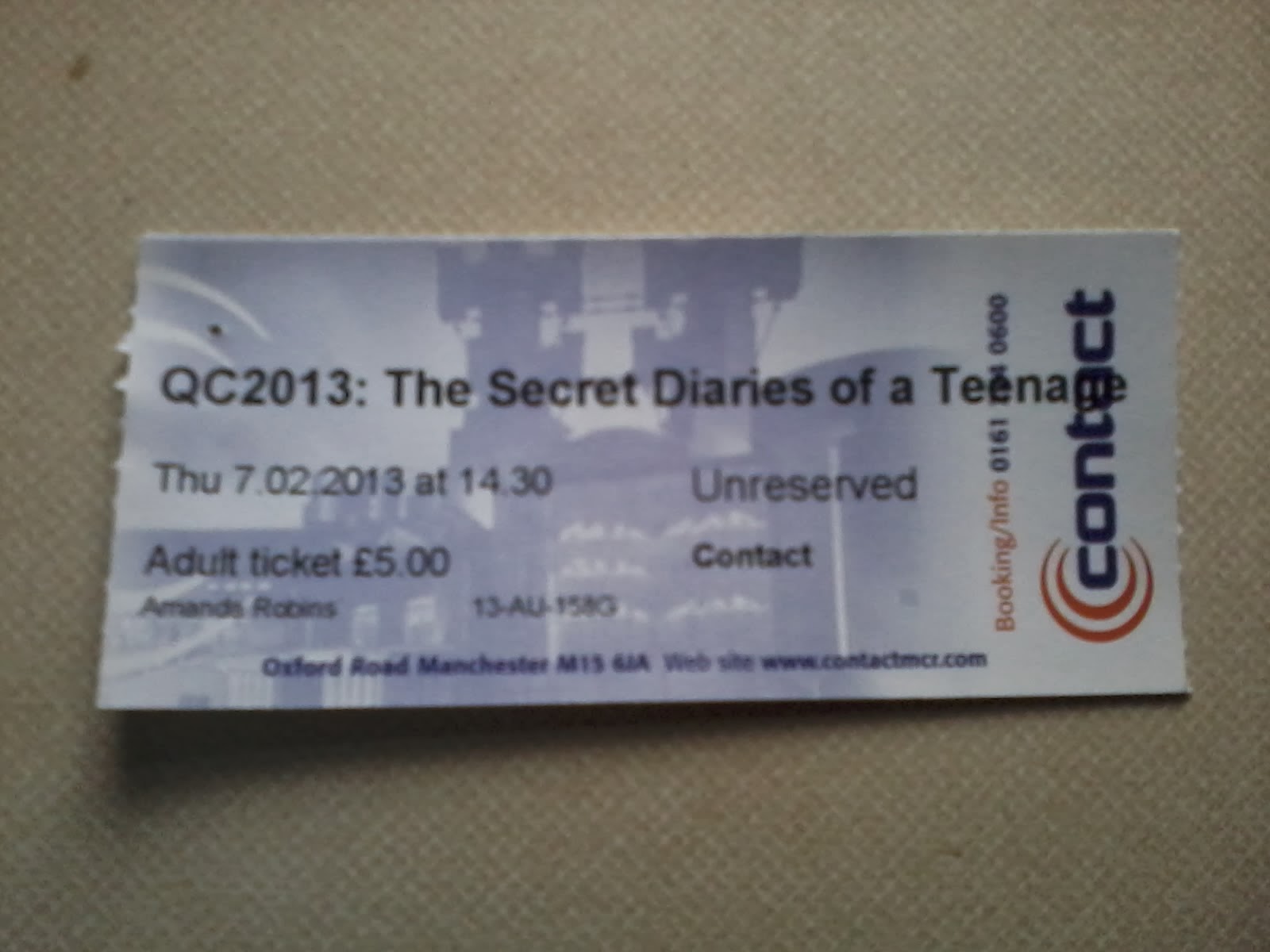 On 7th February I attended the matinee performance of 'The Secret Diary Of A Teenage Queer'. It was one of only two showings performed by the Art With A Heart company at Contact Theatre, Manchester. Performed in a small studio theatre in front of an audience of approximately 40 people the three actors were almost close enough to touch. Although at first I thought that the play would be boring and uncaptivating I found it to be enthralling throughout.

At the start of the performance the house lights went down and there was around a minute of silence before two characters stormed onto the stage, yelling at each other. This immediately grabbed the attention of the audience. As she pretended to read out her diary entries our eponymous heroine looked into the audience, breaking the fourth wall, an acting technique developed by Brecht which forms a bond between character and audience.

The props where kept to a minimum. There was a table with three mugs, a tatty settee, a large black bag and a few cardboard boxes containing the main character's childhood belongings including her teenage diaries. The actors used on stage costume changes to represent going backwards or forwards in time from the present day to the main character's teenage years. I did not think that with such basic and simple set and props the performance would be good, but I was wrong.

All the characters were portrayed as having selfish attitudes, being completely self absorbed and unable to see the points of view of the others. The actors used suspense throughout the performance which created an atmosphere of tension. There were times when they talked over each other, overlapping their dialogues and creating a sense of realism. It was evident that occasionally the actors had forgotten their lines creating a pause, but this came across as natural, as it does in real life.

Throughout the performance there were moments that made the audience cry with laughter, immediately followed by an extremely serious and poignant moment that would have us crying with emotion. We all experienced a roller coaster of emotions in a matter of seconds. The way that the play was performed the audience would feel one very strong emotion and would then be feeling the opposite emotion only seconds later. There was no apparent technique used to achieve this effect other than the fact that with only two actors ever on stage at any time they were completely focused on each other and their timing was perfect.

My personal opinion of 'The Secret Diary Of A Teenage Queer' is that although it is about the struggles of being gay and a teenager anyone who has been a teenager can relate to the subject whether they are gay or straight. Each of the three characters had very strong and unchanging attitudes towards homosexuality. The main character was confused and tried to conform to society's idea of 'normal'. Her father accepted her being a lesbian but did not accept that she and her civil partner wanted to have a child together. Her best friend at school was convinced that she would grow out of her gayness and become like her. The acting was outstanding and although there were only three characters and very basic props the actors showed that a big budget or large cast is not necessary in order to make a performance effective.

Before watching this play I was reluctant to sing with confidence in front of an audience but after seeing the energy of the actors as they sang, danced and made fools of themselves on stage I am now aware that I can not afford to be self conscious if I want to become an actor and that an actor needs to learn to laugh at themselves. In addition I learnt from this performance that if an actor forgets a line they can easily cover up with an ad lib. The use of overlapping of speech over the top of another character's conversation creates a realistic effect and I thank the cast of 'The Secret Diary Of A Teenage Queer' for helping me to get over my shyness and fear in this area.
Posted by Unknown at 04:49 1 comment: