Unit 1 Part B: extend your own arts practice

Recently I attended a willow weaving workshop. The workshop took place in a huge greenhouse in a small garden centre out in a Cheshire village. Before I attended the workshop I was asked to choose which animal I was going to make and to bring a photo for reference to the event. I chose a hare because I love them and it seemed like an interesting animal to make. The 5 hour workshop was run by a willow weave artist called Juliette Hamilton. My mother had discovered her when she had attended a basket making class and when she told me about it I was eager to try my hand at willow weaving. There were 10 of us at the workshop. I was the only young person there. I seemed to grasp the technique fairly quickly unlike some of the others and because I got a few steps ahead they were actually coming to me to see what to do next. 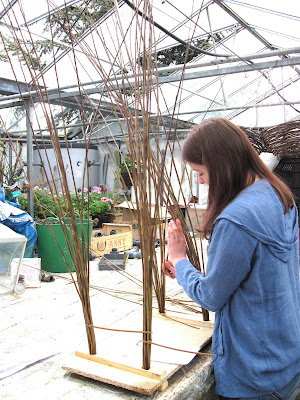 Juliette had soaked the 4' and 5' long willow withies for a few days. She told us that for every foot in length they had to be soaked for a day. The first step was to create the base for the legs. We were given a wooden board with four holes in it. This was for holding our creatures until they were stable and also for getting the legs in the right place and all the legs to match in height. We all chose around 12 willow withies and rammed them into each hole making sure they went right to the bottom of the hole. We repeated this till all four holes where filled. We attached a cable tie around an inch from the bottom of each leg to hold the withies in place. We then tied another cable tie further up the withies where we wanted the top of the legs to be. 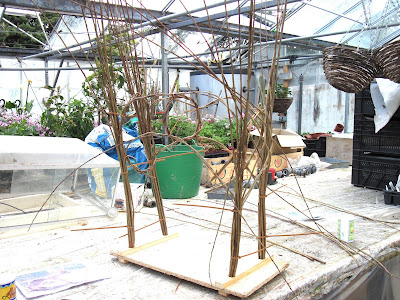 Next we took one willow wisp from each side and shaped them to create the side of our animal. We wrapped them together making sure they did not spring undone and then repeated for the other side.

To create the middle and the shape of the back we made a circle using two willow wisps. To do this we gently shaped one of them into a circle and then we gently wound another willow wisp around the first one. This strengthens the circle so it can hold the willow that will be weaved around the base in later steps. 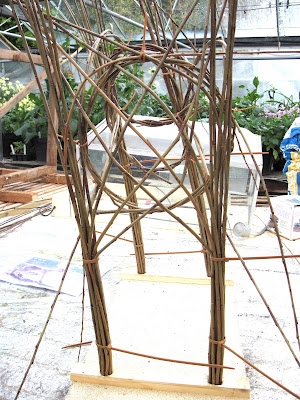 Next we had to create a chest and a bottom for our animals. To do this we took four of the willow wisps from the legs and crossed them over themselves. We did this at the front and back of the body. This is a hard step as you have to make sure they stay in place and do not move. You can hold them together using cable ties if you can't keep them in one place. The cable ties will be removed later. 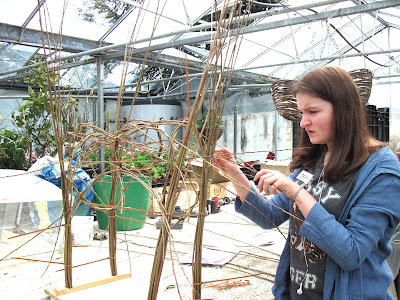 Next we started weaving the spare willow wisps from the legs. They do not have to be neat or go in any direction. They can be as random as you want them to be. We had to leave around three willow wisps on each side where we wanted the head to be.
To create the head we had to make two small circles again - one larger circle for the main structure of the head and a smaller one for the nose. To attach the head we took the left over willow wisps from the legs that had not been used and weaved them onto the head. This holds it in place and also starts to shape the head and neck. To fill in the gaps we weaved in more willow wisps. To make the ears I followed the same steps as creating a circle but instead of a circle I formed the shape of my hare's ears. This is done twice but being careful to leave some ends loose so that I could weave the ears into the head. The same is done for the tail. I chose to over-emphasise the ears, making them larger than they would be in real life. 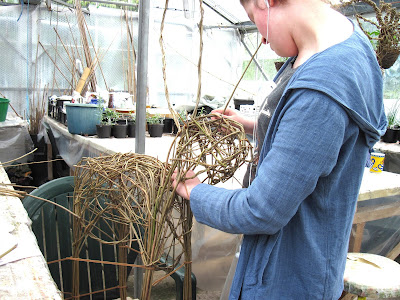 Now for the last step. I had to remove my animal from the board. Once I had done that I wrapped a willow withy around the base of each foot to keep the withies together and for an attractive finish. I also trimmed the feet to make them all level and to ensure that the hare would not fall over. My hare was now completed. You can weave in more willow wisps to the body, head and tail if you think that they are not full enough. You can also remove the cable ties. The cable ties were only there to keep things in place while we made our animals. 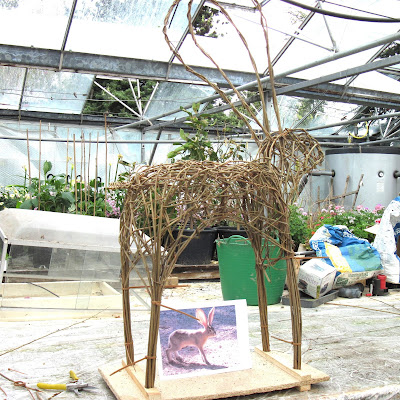 I am really pleased with my hare. It stands at around 4'6” and I am using it as a bedside table. It is sturdy and looks fantastic. I plan to take this willow weaving technique and apply it to my mask making project.

You can see some of the artist's work on her website here:- www.juliettehamiltondesign.co.uk
Posted by Unknown at 07:42 6 comments: