The Package by Tam Hinton 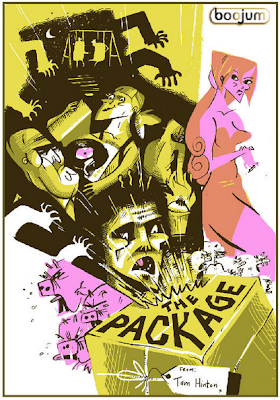 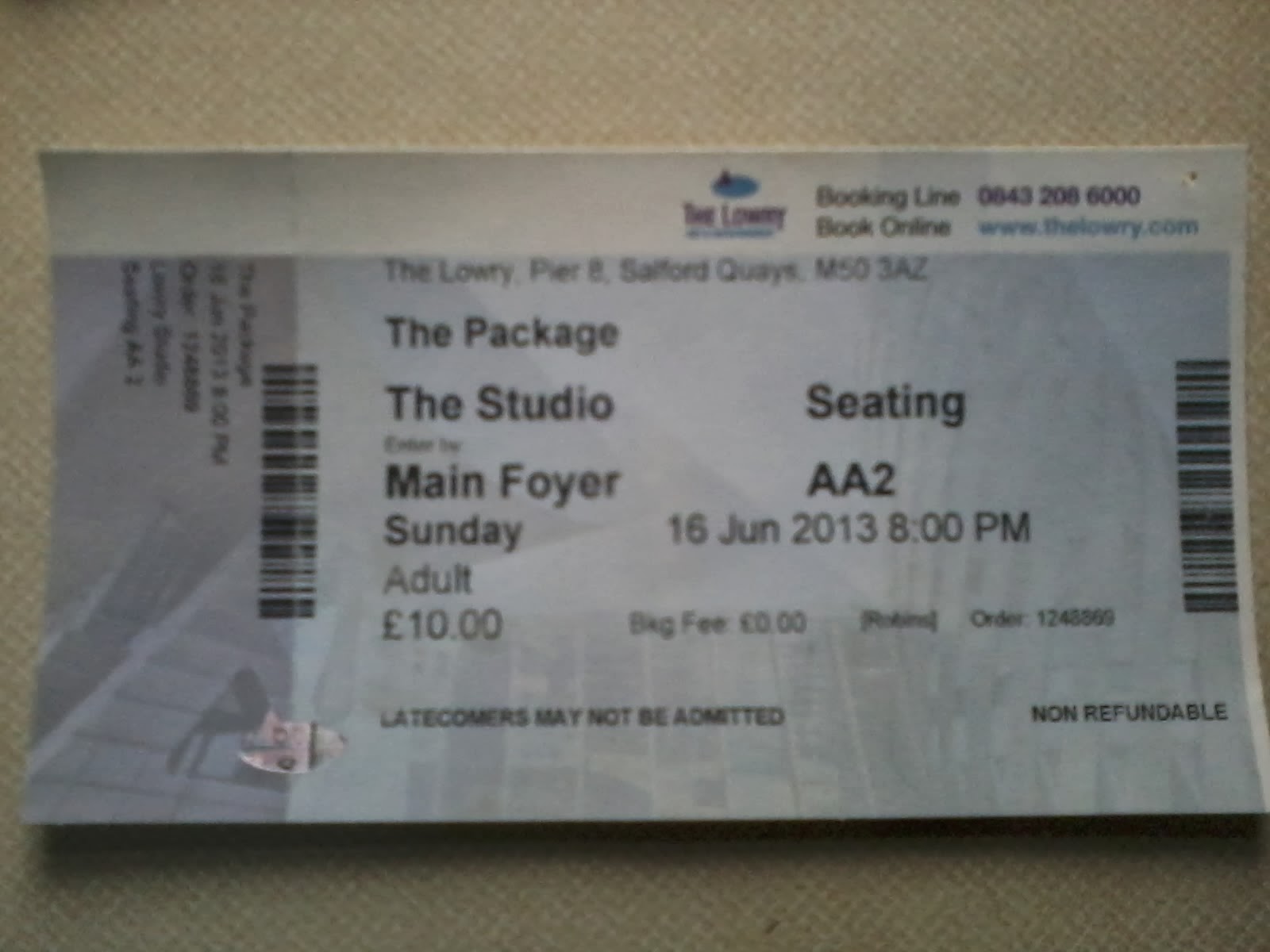 On 17th June I went to see a small company perform The Package by Tam Hinton in The Studio at the Lowry in Salford. The performance was restricted to over 15s and the audience consisted of around only 20 people in a space that would hold 150. The cast consisted of six actors including two women and four men. The props were minimal. There was a magazine which was used throughout the play but with a variety of magazine covers. There was a record player. There were two tables and six chairs which remained on the stage for the whole performance. Unrequired props were removed by the cast. There were no costumes as such but all of the men wore comical socks with suits whose trousers were slightly too short. The two women wore ordinary black dresses, one of which was ground length but was pinned up to make a mini skirt when required.
Each actor had several characters to play, each one offering the challenge of producing very different accents. On occasion this got a little confusing if one of the actors forgot to apply the correct accent or to change their body stance according to their character. One of the female actors had to play the part of a very young woman who was in love with a record player and could not form relationships with humans, but she also had to play a very old woman. Her body language, facial expressions and pitch of her voice demonstrated the age of her characters.
All the actors forgot their lines at least once but each of them had different ways of covering up their mistakes. Some attempted to make it seem natural by moving on quickly. This was a good way of covering up their mistakes but they forgot their lines so many times it soon became obvious what they were doing because there were always pauses that were a bit too long before they applied a cover up technique. Another way of covering up their mistakes was to stammer and mutter as though looking for a way to describe what they were trying to say. I think that this was a good way to cover up their mistakes because it seemed natural and normal but once again it happened too many times not to be very noticeable.
The acting in the Package was not the best acting I have ever witnessed. It was a confusing play that included many long words that were hard to say and even harder to remember for the cast. I think that the complex language used may have lowered the standard of the acting although with more preparation it could have been greatly improved. The play left me feeling rather confused and with more questions than answers. It was an extremely surreal play that was hard to follow. The writer was constantly attempting to shock the audience by pushing moral boundaries and I felt that the audience were not comfortable with some issues raised. I think that the play was well written at the beginning but as it progressed the writing became almost careless as though the writer wanted the play to be finished. The convoluted language tapered off towards the end of the play creating an imbalance because the main aspect of the characters' personalities were the words that they used. So the lack of complex language being inconsistent prevented their characters from continuing to be the same.
From watching this performance I realized how important it is to know your lines and those of the other players more than perfectly. I also observed techniques to use if and when I do forget my lines and I intend to use them where necessary.

On reflection I think that visiting various local art galleries and being present at some rather unusual theatre performances has definitely influenced the way that I look at art and performing arts. By visiting galleries I have been able to look at some of the most famous Pre Raphaelite paintings that are recognisable to many. They have been reproduced as posters, prints, postcards and greetings cards. By looking at the original paintings I have been able to see the brush strokes, the subtle finer details that would hardly be visible on a reproduction and appreciate the true colours. I have been surprised by the sizes of some of the paintings I have seen. Some are much smaller and others much larger than I had imagined them to be. I have also been to exhibitions by artists who are not well known in this country but who are big in their own countries. I have been to small theatrical performances with only a handful of actors who have also written, produced and performed in the plays. These are the productions that really appeal to me. I prefer them to the huge and lavish expensive to produce plays and musicals such as those that reside in the West End of London. I feel that these productions are so expensive to put on that the ticket prices are exorbitant and restrict a lot of people from being able to enjoy them.


Having attended exhibitions of famous paintings as well as those of lesser known artists I much prefer the less mainstream shows. I find the art more interesting and more experimental. I can say the same thing for the theatre performances that I have attended this year. I find that not only is the writing more dangerous and boundary pushing but also the performances are more exciting and electric. As well as this, the audiences at these small venues create a more intimate and inclusive atmosphere which I find more enjoyable.